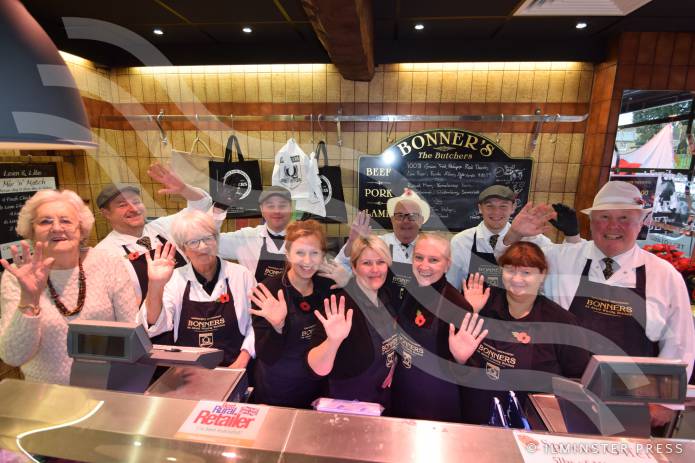 LET’S not mince words - Ilminster’s award-winning family butchers has been a top joint in the town for half a century.

December 28 marks 50 years that Bonners the Butchers, at 37 Silver Street, has provided award-winning service to the people of Ilminster as well as from near and far.

And to mark the occasion and thank customers for their loyalty they will be having a special week when many meats will be on a 50 per cent offer.

This offer will coincide with the switching on of the town’s Christmas lights - proprietor Clinton Bonner is chairman of the Ilminster Christmas Lights Committee, just like his late father Mike before him.

So the special offers will start on Wednesday, November 20, until Saturday, November 23 - including late night opening on November 22 which is also switch-on night when the town’s fantastic illuminations will kickstart the Christmas period.

“Ilminster and district has been very supportive of Bonners over the years and in this way hopefully we can give something back.’ said Clinton Bonner.

“My dad was always involved in the Christmas lights and this seems an appropriate way to remember his work in getting the lights in the town started backing the early 1980s.”

It was purely by coincidence that the Bonner family started the business in the same Silver Street premises just after Christmas in 1969.

Mike Bonner, born in Teignmouth, Devon, was a butcher with Eastmans in Totnes and it was there that he met his future wife Parma, who was a cashier.

“Dad thought that the streets of London were paved with gold so they moved up to the city where he worked as an area manager for a chain of butchers in the 1960s,” explained Clinton.

“When they travelled back home to see family in Teignmouth, Ilminster was a convenient stopping off point - there was no bypass back then - and they would stop for refreshments in the Dolphin pub.

“In 1969 they noticed that the butchers’ premises opposite the Dolphin was up for rent - it had been closed for six months.”

The shop was owned by the Britten family and Mike and Parma decided to take the plunge and start their very own family butcher’s - despite the fact that back then there were five other butchers trading in Ilminster and two others close by in Horton and Shepton Beauchamp.

Things did not always go to plan - in December 1970 - their first trading Christmas - the Bonners were sold turkeys which quickly went off.

“It was a bit of a blow and they were badly let down by the supplier as they had just a day to go around and find enough turkeys from local farmers to satisfy 30 customers,” said Clinton.

Parma became well known locally and at the now closed Ilminster cattle market, which was situated between Swan precinct and Tesco, she became the market’s first lady cattle buyer and at the annual Christmas Fatstock Show she became a judge. My cousin at 16 came to work for my father and was a fantastic help to him during the 1970 and 90s.

And it was in the early 1980s that Mike, with the late Ron McQueen and the late Tony Davis, decided to brighten up the town at Christmas with the first couple of garlands and a large tree at the Minster churchyard in Silver Street. This has grown and grown over the years to what we see today, with Clinton now at the helm to carry on the work of his late father.