ILMINSTER NEWS: Pyjamas and reading go together well – whatever your age! 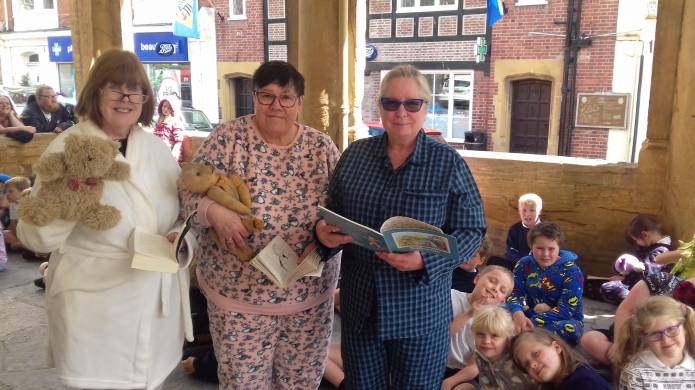 THE leader of South Somerset District Council, Cllr Val Keitch, donned her pyjamas and read stories to young children from Greenfylde First School in Ilminster as part of a national initiative.

Libraries across the county hosted pyjama parties from June 3-7 and distributed books to celebrate the Book Trust’s Pyjamarama event aimed at getting more children reading.

Families were encouraged to wear pyjamas and/or bring in teddy bears to join in with the fun at Pyjamarama themed Toddler Rhyme Times and other activities taking place throughout the week.

The Book Trust is working with Somerset County Council and other community partners to ensure as many children as possible have their very own story to read before bed.

An estimated one in four children in the UK aged up to five are not read to regularly.

The Ilminster event was organised by the Friends of Ilminster Library group and was held at the Market House in the centre of town.

Cllr Keitch was joined by fellow Friends members, Veronica Horman and Cllr Linda Vijeh, who is the Conservative group leader on the district council, also dressed in their PJs, for the fun event.

Cllr Vijeh, who also represents Ilminster at Somerset County Council, said: “As the Children’s Champion for Somerset I know how important it is for children to learn to love reading.”

PHOTO: Pictured (from left) are Veronica Horman, Cllr Val Keitch and Cllr Linda Vijeh at the Pyjamarama event in the Market House in Ilminster. Photo: Submitted.