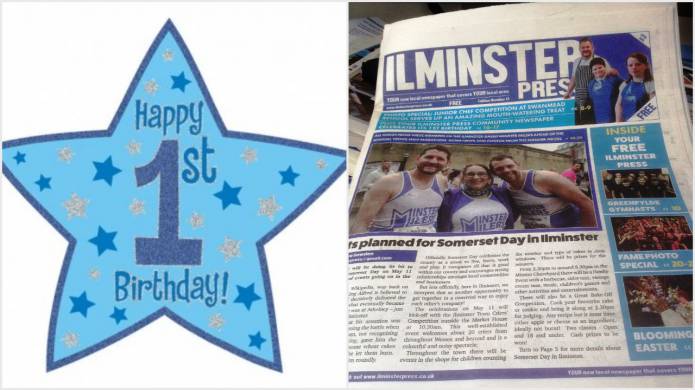 THE monthly Ilminster Press community newspaper has celebrated its first birthday with the publication of Edition Number 12.

The April edition of the newspaper is out now and available for people to pick up for FREE from various outlets in and around Ilminster including Tesco store, Tesco garage, McColls, the Co-op, Cottage Flowers, Shrubbery Hotel, Ilminster Post Office, Ilminster Arts Centre, Spar Garage, Horton Post Office, Monks Yard, Jordans Courtyard, Trading Post Farm Shop and the Lopen Raj.

A total of 2,500 copies of the Ilminster Press are distributed each month.

Although editor Steve Sowden had been thinking the idea for some time it was around a year ago when he got the “lightbulb moment” to actively pursue the project when I was asked to help promote the 2018 Ilminster Literary Festival.

“Little did I know back then what I was starting – but I have to say that the past 12 months have been hard work, but extremely satisfying and a lot of fun,” he said.

“There was never any doubt in my mind that I would ever find myself with the headache problem of “nothing to put in the paper” because Ilminster has always been a vibrant town – full of life, full of energy, a fantastic community spirit and plenty going on.

“Ilminster Cricket Club, Ilminster Town Football Club, Ilminster Town Council, Swanmead Community School, Greenfylde First School, all the various clubs and societies within the town, the local traders and the public – it all makes for a terrific town and I’ve been proud to bring you Ilminster Press each month.”

Steve said the success of Ilminster Press had led him to broaden his horizons further by starting a Yeovil Press community newspaper which also became a monthly publication in January.

“But I could not have achieved any of this without some incredible support,” he said.

“A special big thank you to freelance photographer Christine Jones, who some of you might know better as “the lady that takes the photos” – her pictures, hard work, enthusiasm and encouragement have been key to the success of Ilminster Press.

“I would also like to thank James Healey, of JRH Media, for his superb help with design and layout each month and for putting up with my ditherings!

“Plus I would like to thank the various outlets who have agreed to take copies of Ilminster Press each month; the advertisers once again for their support; and, of course, the readers for your contributions and words of support.”

The next edition of Ilminster Press will be out in mid-May. So please get in touch with any events you would like covered and featured in the paper or send us your news, views and photos to me at ilminsterpress@gmail.com .